Case study: How to install a green roof on a private home

The site: A 900-square-foot space on a historic building in the Prospect Lefferts Gardens neighborhood of Brooklyn. The house owner recently re-roofed the building. In anticipation of the installation of a green space, she had the roofer raise the skylights a few inches and put the waterproof material on the sides of the roof walls.

The plan: The homeowner envisioned a wide green carpet, a small space for growing fruits and vegetables, and an area to hang out with friends. She hired Brooklyn Greenroof architect and green roof professional Inger Staggs Yancey to bring her idea to life.

According to Yancey, installing a green roof is like putting together an intricate puzzle, and because of this, you shouldn’t do it yourself. During the first design discussions – there were many for this location – Yancey called in a structural engineer. “The first thing you want to do is figure out how much weight the roof can support, whether it is a lot or a little. That will change the kind of designs you can support.”

The plants: The engineer’s estimate was that the roof could hold 55 pounds per square foot – enough force to support a full roof farm. “The average green roof needs at least an inch or two of growing media,” explains Yancey. “If you want to grow vegetables, the media must be 7 inches deep. But the more media you have, the more it weighs.”

For a while, the homeowner came up with the idea of ​​installing a full rooftop farm, but eventually decided to revert to her original concept of a low-maintenance green space with a few planters for food. Most of the roof would be covered with a blooming sedum. 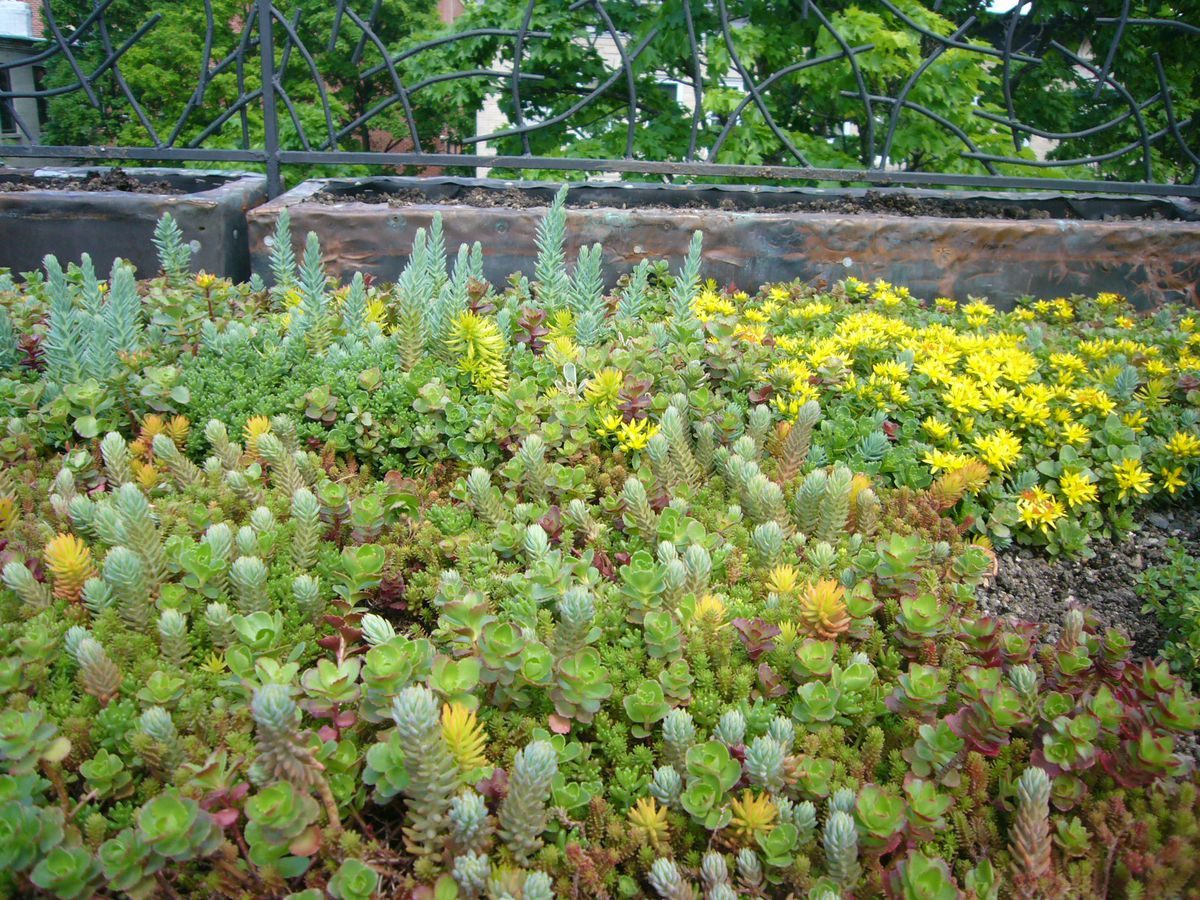 They chose blooming sedum, a standard green roof plant, for their roofing.

“Sedum is the standard green roof plant,” says Yancey. “It is extremely drought tolerant, easy to care for and never needs to be re-sown or watered. It is a plant that can grow on mountain tops in nutrient-poor soils. Any flowers that fall off decompose, in some way, forming the fertilizer the plant needs own small composting. “

The layers: Green roofs consist of layers that protect the building structure from water and at the same time hold and preserve the plants. The bottom layer is a root barrier, usually made of very thick plastic sheeting, that prevents strong roots from entering the building.

“Roots are attracted to carbon,” explains Yancey. “And some of the cheaper roofing materials are mostly made of carbon. This is one of those unfortunate coincidences. You have to work hard to keep them separate.” 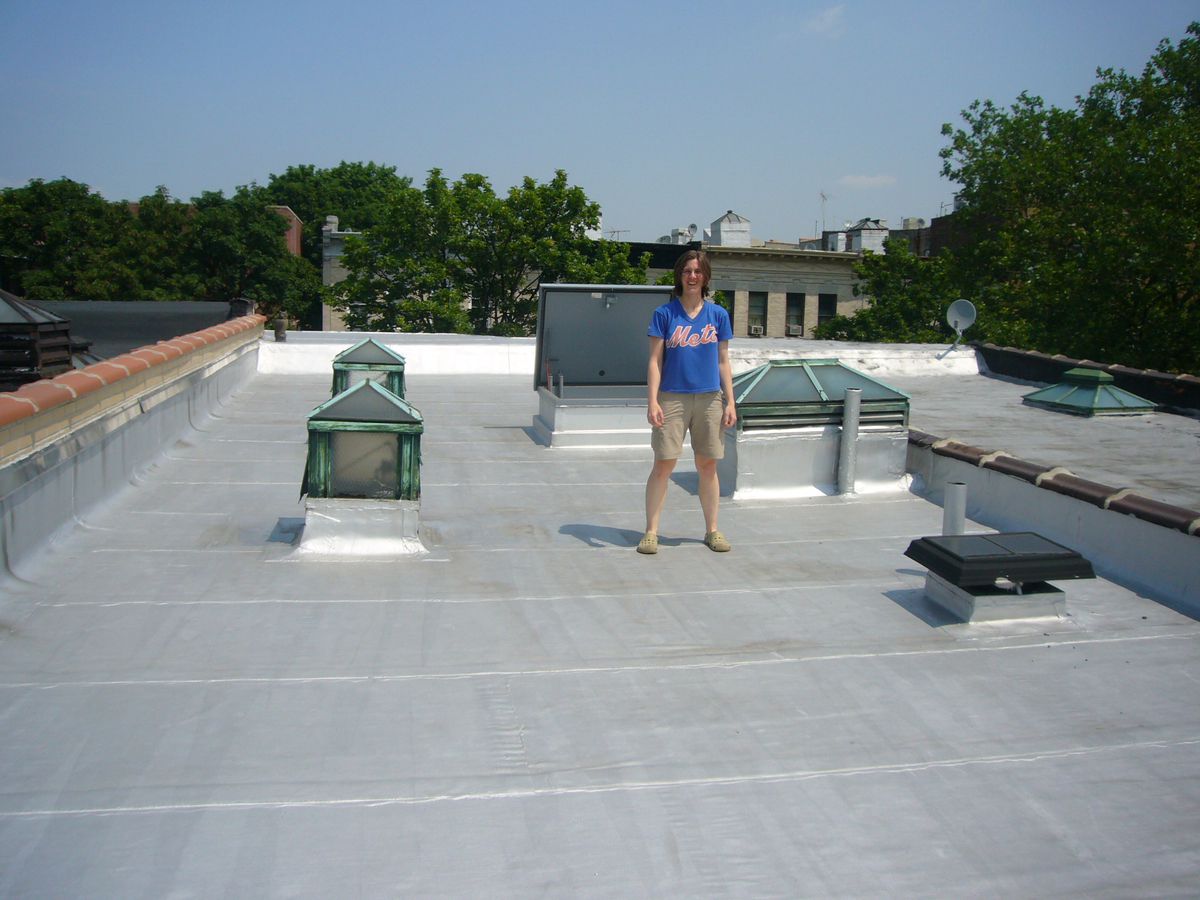 The roof before its green makeover. All photos courtesy of Brooklyn Greenroof.

A few inches of edging material – usually stone or gravel – is then used to create a root-free edge that separates the growing area from vertical elements such as walls or, in this case, the sides of the skylights. Metal slats between the rocks and the growth media help separate it while maintaining drainage.

Next is a moisture-retaining layer that looks like an egg crate mattress. Enough water collects in the divots of the egg box to sustain the plants, while excess water can drain through holes on the raised bumps.

Left: installing the root barrier. Right: Installation of the ice-box-like moisture retention layer, which was temporarily weighted down with bricks.

“One question I always get from homeowners is, ‘What happens to the water when it rains? Where does the water go?’” Yancey says. “The answer is it goes to the same place it would be if you didn’t have a green roof. The roof is designed so that water seeps through the green roof and in the same pattern as a normal roof to the gutters and downspouts can flow. “

Above the moisture layer there is a filter fabric that has been specially developed to hold in the dirt and at the same time drain water. A variety of filter fabrics and types of growth media exist and it is important that they are compatible. Incorrect assignment can lead to clogged fabrics or media that are washed away.

Then it’s time for the growing media – aka dirt – and the planting in. In this case, Yancey opted for pre-grown sedum, which comes in large tiles.

The timeline: After Yancey and the homeowner finalized plans for the roof, Brooklyn Greenroof applied to the city’s Department of Buildings for permission. In New York City, green roofs with dirt less than ten inches deep do not require a permit. However, the city strongly recommends the permit for safety reasons, and the permit qualifies homeowners for a tax break. While most green roof permits take about a month to complete, in this particular case the process took a little longer.

A crane lifted the bags of growing media onto the roof.

After that, the company began ordering the necessary materials and coordinating deliveries. It usually takes about a week to install a green roof. However, due to the layering of the installation, it is important that the materials arrive one by one. Planning the installation therefore takes a long time.

“It’s like putting an intricate puzzle together,” says Yancey. “I have a system where I weigh down the first layer with the next layer on the same day, otherwise the materials or growth media could blow away. This is another reason why nobody should build a green roof themselves.”

With the help of a crane and a block-and-tackle pulley system above the skylight, the materials reached the roof almost correctly: first the rolls of the root barrier, then the 1×2 meter bricks of the moisture layer and rolls of filter fabric. The final day was supposed to be laying out the growing media and the large square tiles of Sedum, but the cliff edge and metal border came a few days late and had to be installed the following week – after the plants were already up and running.

The entire installation took a total of around five days, with a weekend between planting and the final setting in of the edge. The homeowner also built a series of copper-covered planters to sit on the raised cornice area near the front of the building. Wooly pockets with strawberries hung nearby.

The money: The average cost of a bare bones green roof – including design, approval, and installation – is usually between $ 18 and $ 22 per square foot. A deeper or more specialized roof like this one can cost more, anywhere from $ 30 to $ 50 per square foot. The tax rebate for this project was $ 5.23 per square foot of green roof.