“When Christine came to us for help, all she asked for was our help in demolishing her tornado-devastated house so she wouldn’t be held responsible for a dangerous structure,” said Laura Mercer, the group’s managing director.

However, the disaster team was able to come up with another plan to Creager: rebuilding.

Most of the roof was torn down, the porch was badly damaged, many windows were blown out, and rain poured into the house, filling the basement, eventually leading to severe mold. In short, according to Habitat for Humanity of Greater Dayton, which led the construction project, it was beyond saving.

Christine Creager’s home in Old North Dayton will be one of the first to be remodeled this spring by volunteer groups organized by the Miami Valley Long-Term Recovery Operations Group. CHRIS STEWART / STAFF 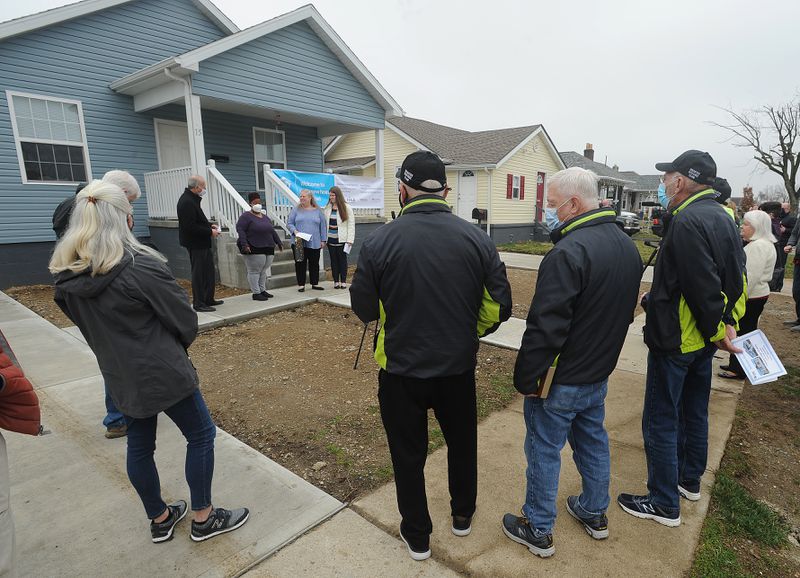 Habitat for Humanity and the Miami Valley Long-Term Recovery Operations Group welcome the Creager family home to Macready Ave. Tuesday, March 16, 2021. The home of the Creager family was destroyed by the tornadoes on Memorial Day 2019. MARSHALL GORBY / STAFF

Among the many parts of the remodel was a Small Business Administration loan that was funded through a partnership with CareSource by the Miami Valley Long-Term Recovery Operations Group, the Federal Home Loan Bank of Cincinnati, and Habitat. The work was completed by volunteers from Habitat, as well as the disaster relief team from SouthBrook Christian Church and the Brethren Disaster Ministries. Logan Heating and Air Conditioning, Inc. donated and installed a new HVAC system in the house.

“I really don’t know what we would have done without Habitat’s help,” said Creager. “I was an uninsured homeowner and didn’t have the resources to start over.”

On the night of May 27, 2019, a record-breaking 16 twisters struck the west side of Ohio, including a powerful EF4 tornado that raced over Montgomery County, rendering 915 buildings uninhabitable. A disproportionate majority in lower-income areas where fewer property owners were likely to have been covered by insurance.

When the tornado hit, Creager, their 18-year-old daughter Kansas, and their cat Midnight fled to the basement.

“It was just unreal – the creak, the house blows away,” Creager said last year. “I went out in the dark and looked up and my roof was gone… All the trees and everything was down. It was amazing. It was like World War III out there. “

They lured midnight out of the rubble three weeks after the storm.

Midnight now has a built-in seat that Habitat employees installed in the new front window.

“It’s just so perfect for her to be able to enjoy the window,” said Creager. “We are very grateful that you did that.”

Habitat and the recovery group also helped rebuild Creager’s parents, Dorothy and Chris Johnson. The Johnsons moved home last September, where they had lived for nearly a quarter of a century.

“It looks better now than when we first moved in. You did a great job, everyone involved. I’m just grateful to them, ”said Chris Johnson, a Vietnam War veteran.

Of the 2,076 cases opened through the group’s long-term recovery case management system, 446 were homeowners seeking help with repairs or rebuilding. Of the 133 cases open, 71 are homeowners who, according to Mercer, lack the resources to fully repair or rebuild them.

The community heals a little more with every tornado-damaged home that is repaired, said Norm Miozzi, executive director of Habitat of Greater Dayton.

“Helping families like Christine and her daughter recover from the tornadoes not only puts them on their way to a strong, stable future, but also helps restore the neighborhoods they live in,” he said.

Creager and Kansas lived in Miami Twp. Rented house with the Johnsons until they moved home last year. Now at home, mother and daughter went through things they hadn’t seen in almost two years.

“It’s a daunting task to just get our boxes out of storage, go through everything and remember what our life was like,” said Creager. “Everything has been put on hold.”

The outside of the Creager’s house is painted blue, as before. The inside is a little smaller, but the open floor plan makes it appear larger, she said.

Creager said she was grateful for the many volunteers and donations that have helped tornado survivors, including their families.

“God has blessed us with this brand new home and we hope that we can serve Him as best we can,” she said. “It was completely unexpected and completely undeserved.”

In addition to a new garage, the house has a new basement that Creager does not want to use as storm protection.

“Hopefully we never have to do that again in our lives,” she said. “We don’t want to go through that again. An F4 tornado wasn’t fun. “

Individuals who still need help recovering from the tornadoes can contact a disaster incident manager by calling Catholic Social Services at 937-223-7217. 1137. 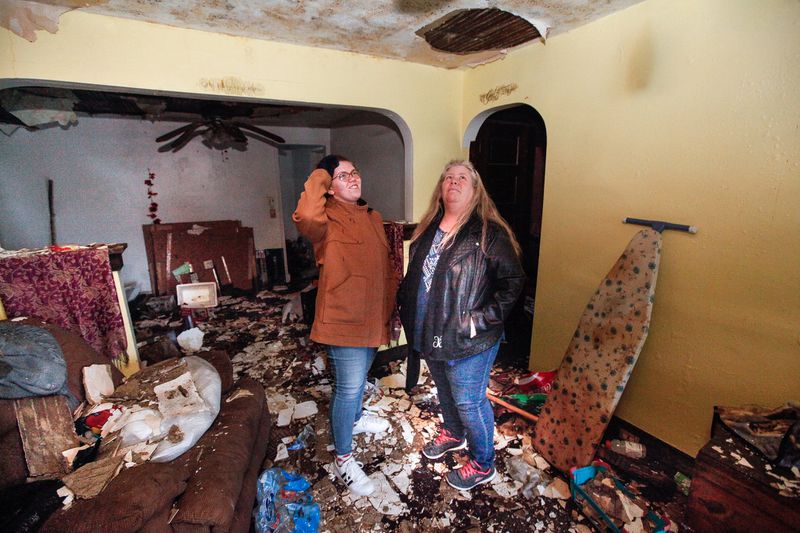 Water drips on tornado survivors Christine Creager (right) and her daughter Kansas as they visit their home on Macready Avenue in Old North Dayton. Her home will be one of the first to be rebuilt this spring by volunteer groups organized through the Miami Valley Long-Term Recovery Operations Group’s case management system. CHRIS STEWART / STAFF