Fact Check: Old, unrelated video of bats streaming out from a roof linked to coronavirus outbreak

During the coronavirus outbreak in China and the WHO declaring it a global health emergency, a video of bats being removed from a roof is making the rounds on social media. It is claimed that these are chrysanthemum bats that carry coronavirus. Hundreds of bats are seen in the video hiding under the tiles of the roof of a house in Wuhan, China, which is believed to have originated the virus.

Today’s Anti-Fake News War Room (AFWA) in India determined that the viral video is around nine years old and originated in Florida, USA. There is no connection to the current coronavirus outbreak.

The archived version of the article can be seen here.

AFWA received the message via its hotline (7370007000). The message with the video reads, “The main source of the coronavirus has been found. It turns out that many rooftops in Wuhan, Hubei province are heavily infested with chrysanthemum bats, a type of bat that carries the virus in their bodies. When snakes eat these bats, snakes become secondary carriers, and when Chinese people eat these snakes, they become human carriers of the virus and spread to other people through air and other public structural surfaces by coughing, sneezing, runny nose, etc. “

The video is pretty viral on Facebook with similar claims.

Is the video from China?

No, this video is not from China. We found the truth after keying the video using the InVid tool and doing a reverse search for one of them. According to some news articles, the video came from Miami where a team of builders from the Istueta Roofing Company were removing tiles to discover the home of hundreds of bats. The news report released in April 2012 also states that it was a Mexican fruit bat.

We also found the longer version of the video uploaded by ‘Istueta Roofing’ to their YouTube channel on June 10, 2011. You can see the viral part of the video in sections from 6 minutes 55 seconds.

Istueta Roofing’s website clearly states it has been the most trusted roofer in South Florida since 1985.

Did the coronavirus come from bats?

Possibly yes, but not yet established. A study at UC Berkeley suggests that bats’ strong immune systems promote virus reproduction, and it is no accident that some of the worst viral disease outbreaks in recent years like SARS, MERS, Ebola, etc. have come from bats.

Is there a connection between coronavirus and bat soup?

There is currently no evidence of this. Some of the videos of people having bat soup are also being circulated claiming that they are responsible for the coronavirus outbreak. However, many of these videos turned out to be older and came from countries other than China. There is no official confirmation that bat soup could be a cause of the deadly virus. 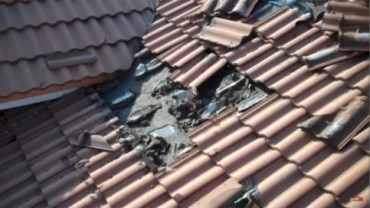 claimBats responsible for the coronavirus outbreak came from the roof of a house in Wuhan.ConclusionThe viral video is around nine years old and is from Miami, USA.

The number of crows determines the intensity of the lie.