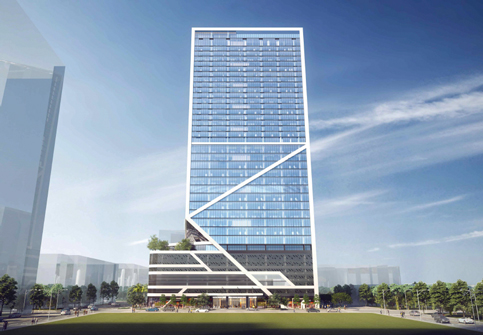 The plan begun 14 years ago to complete a skyscraper in the heart of the city center has developed again. This time, more than 250,000 square meters of office space are to be brought to the city of Miami.

The latest proposal is called Miami Station and is slated for the 530 NW First Court.

The mixed-use project is due to be examined by the city’s Urban Development Review Board on February 17th.

PRH Miami Central LLC is the owner and developer of the property on the southwest corner of Northwest First Court and Northwest Sixth Street, where a mass of concrete and rebar – the ghost foundation of an unfinished tower – has stood since 2006.

The property is across from the new 3 MiamiCentral development.

A previous owner had a plan for a tower on the site prior to the Miami 21 enactment that had been approved under the city’s previous zone code.

In 2019 a new owner proposed a project called Krystal II. The plan was for a 32-story tower with 154 residential units, approximately 79,180 square feet of office space, and 4,400 square feet of commercial use on the first floor. Parking on the base was designed for 251 vehicles.

This proposal was recommended to the Audit Committee for approval.

The latest proposal adds nearly 10 floors and more than doubles the parking spaces.

Miami Station is 41 stories or 458 feet tall and has 309 residential units, 256,223 square feet of office space, 9,647 square feet of commercial space, and parking for approximately 525 vehicles.

The office space would take up 12 floors.

Brian A. Dombrowski, an attorney representing the contractor, wrote in a letter to the city: “The project aims to redevelop the property by activating the pedestrian zone and providing a structure with a variety of uses.

“The project is a transportation hub due to its proximity to Overtown Transit Village underground station and is located in a city called TOD (Transit Oriented Development). Various underground stations are also in the immediate vicinity. The subway stations are one block from the property. The property is also one block from (MiamiCentral Station and) Brightline Station. The property is also easily accessible via bus and trolley routes, ”he wrote.

While the proposal for Krystal II included building the foundation from 2006 – beginning a parking pedestal – this latest proposal will remove the structure and start over, according to Dombrowski.

“The property currently consists of an unfinished park structure to be demolished and vacant land,” he wrote.

He added, “The proposed project will line the sidewalks with trees, provide shade and provide a better pedestrian experience.”

The Miami Station was designed by ODP Architecture & Design.

The developer is requesting several exemptions, including:

■ Reduce parking required by up to 30% within a half-mile radius of a walk-through development.

■ So that the parking along the main front can extend into the second layer above the first floor.

■ To allow a vehicle entry distance of less than 60 feet. Due to discussions with the zoning administrator, Northwest Second Avenue was identified as the main front, so that the loading access must be relocated to the front of Northwest First Court. Less than 60 feet apart is required to consolidate parking access and charging access. The access points are located on the southernmost part of the facade in order to reduce possible pedestrian conflicts.