Foster + Partners has completed its newest Apple Store in Miami with a wavy white concrete roof that is based on the city’s Art Deco buildings.

The store is called Apple Aventura and is located in the Aventura Mall in north Miami. 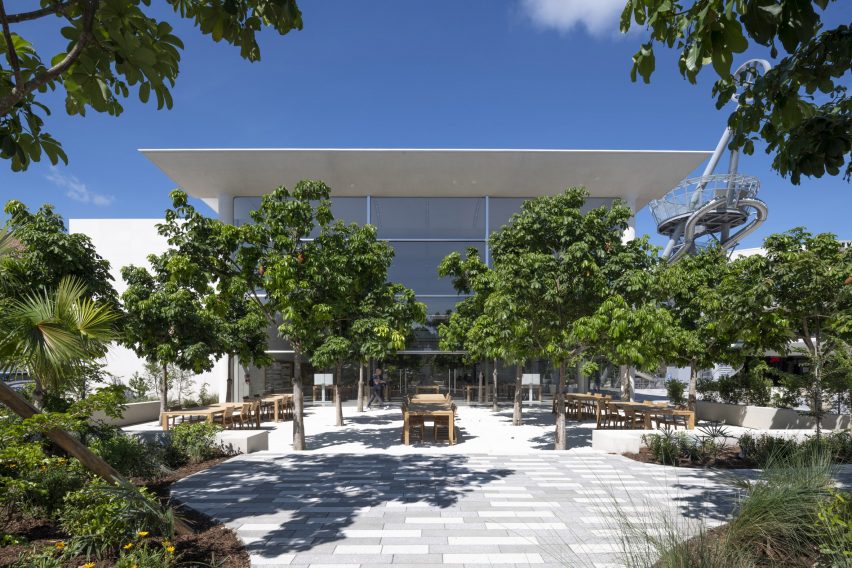 It consists of a box-shaped, two-story building with glass walls and trees inside, following the aesthetics of the numerous stores that Foster + Partners created for Apple.

“This place is very ‘Miami’ to me – its special trees, the lights and the new roof,” said Ive.

“It’s also the epitome of Apple, blending the outdoor lifestyle with a sense of freedom and creativity that is essential to the way we work,” he continued. 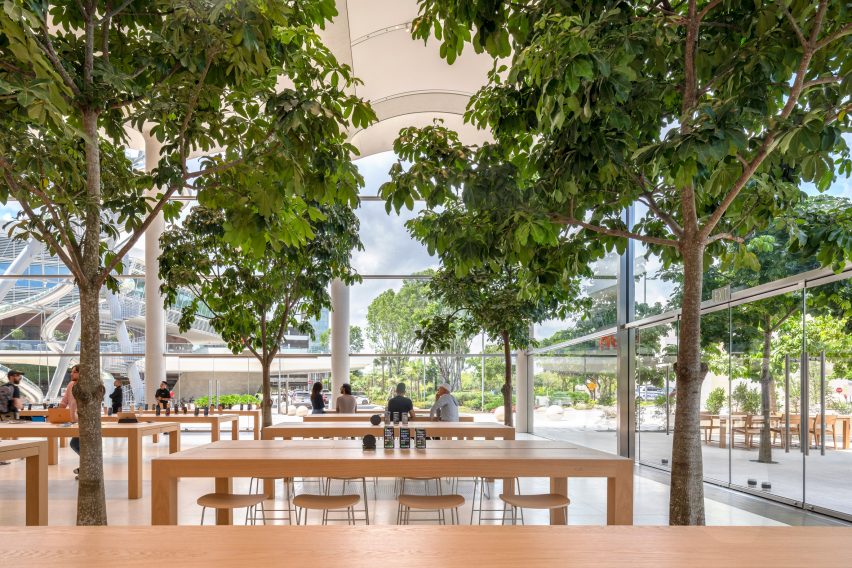 The corrugated roof over the building is based on the 1930s modernist buildings of Miami’s South Beach, which feature white concrete, curved walls, and geometric details.

“The language and materiality of the Apple Aventura Mall are inspired by Miami’s white Art Deco traditions and the white climate and make them an expression of their place and their culture,” said Stefan Behling, Studio Manager at Foster + Partners. 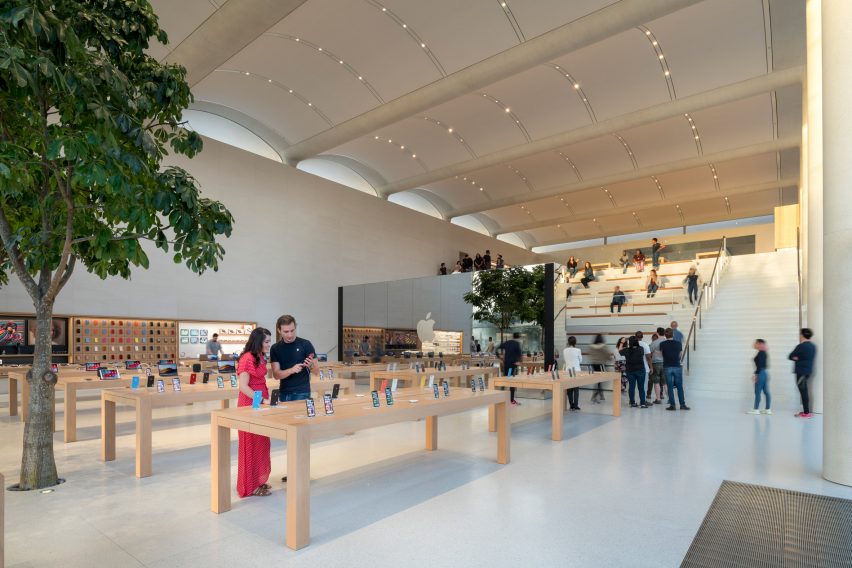 The roof consists of seven prefabricated, six-meter-wide concrete arches that are colored white. The barrel vaulted ceiling is supported by thin steel pillars, which are also colored white and clad with concrete.

“We love the honesty and purity of the concrete,” said Behling.

Apple Aventura is the first Apple Store to be built from white precast concrete. The material is a continuation of its application at Apple’s Cupertino headquarters, which was completed by Foster + Partners in April 2017.

The concrete component in Apple Aventura is made up of 24.3 meters of beams that extend between columns 18.2 meters apart. White fabric then covers the ceiling for the acoustics. 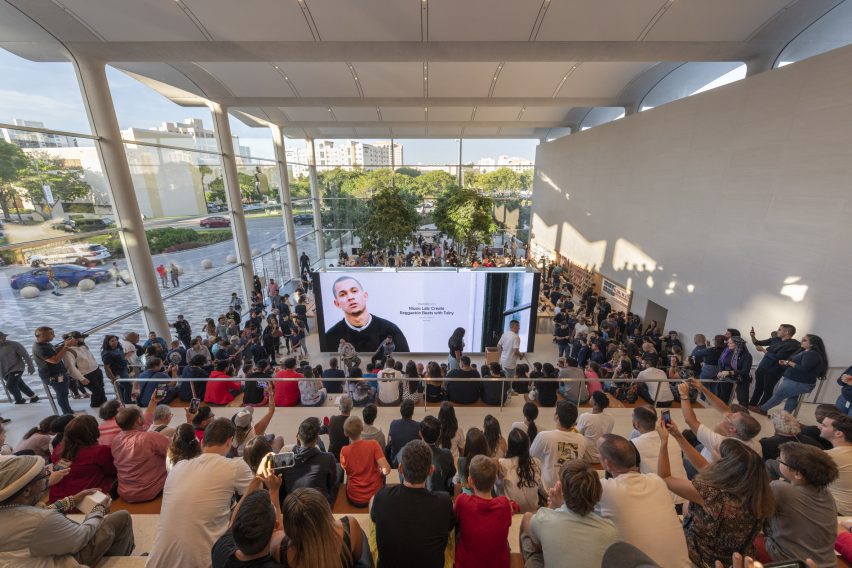 In the center of the store are built-in stadium-style seats overlooking a “forum screen” showing images.

The steps are two-tiered and have leather seats and charging stations. In addition to Apple talks and Apple Music events, they also serve as a location for hosting Apple Genius appointments. 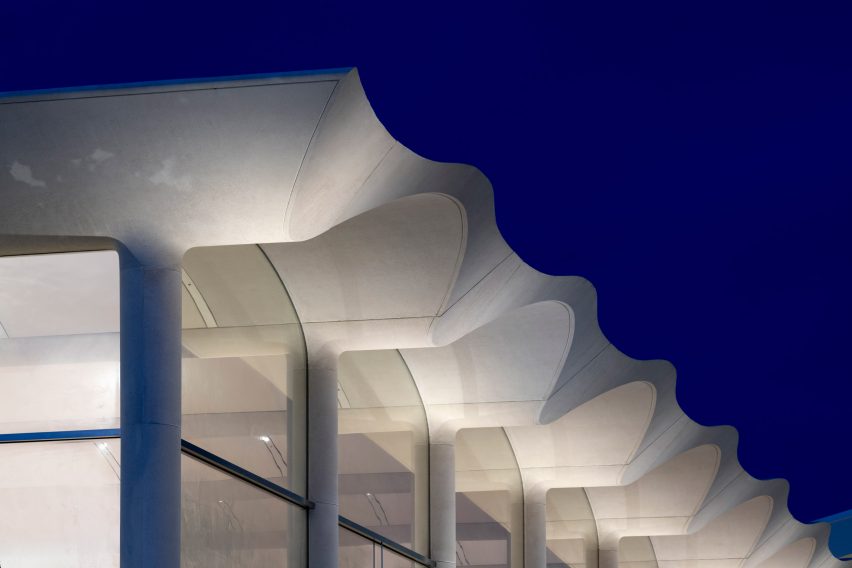 There is a shop area at the top of the stairs that is accessed through an entrance on a higher level. At the bottom of the stadium there is a light-flooded room with wooden tables next to planted indoor trees to display Apple products.

The building and the square of the shopping center are anchored with trees, low plantings and teak patio furniture. 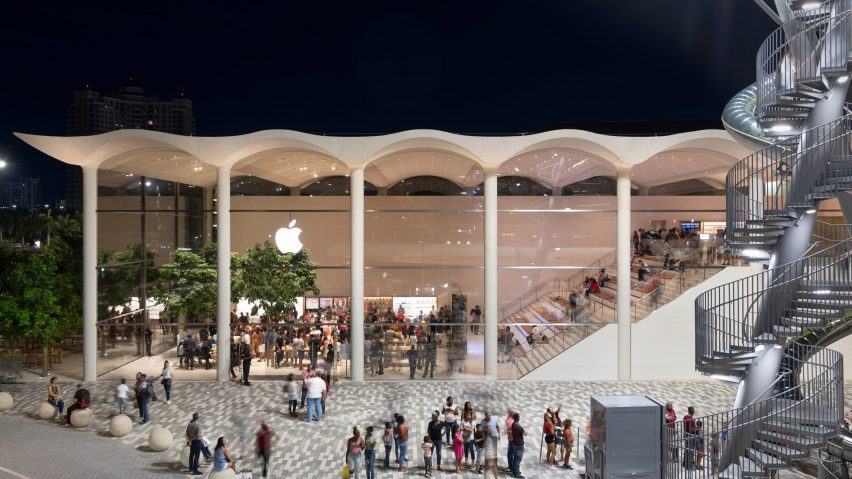 This courtyard is designed as the “answer to Miami’s outdoor lifestyle” and also serves as the “outdoor genius grove”. Nearby is a garden with a metal slide called Aventura Slide Tower by the German artist Carsten Höller.

Foster + Partners has developed a number of Apple Stores that implement the technology giant’s retail vision. Others in the US include Apple Michigan Avenue in Chicago, which has a roof that resembles a Macbook, and a store in a historic Washington DC library.

Find out if your homeowners insurance covers winter storm damage